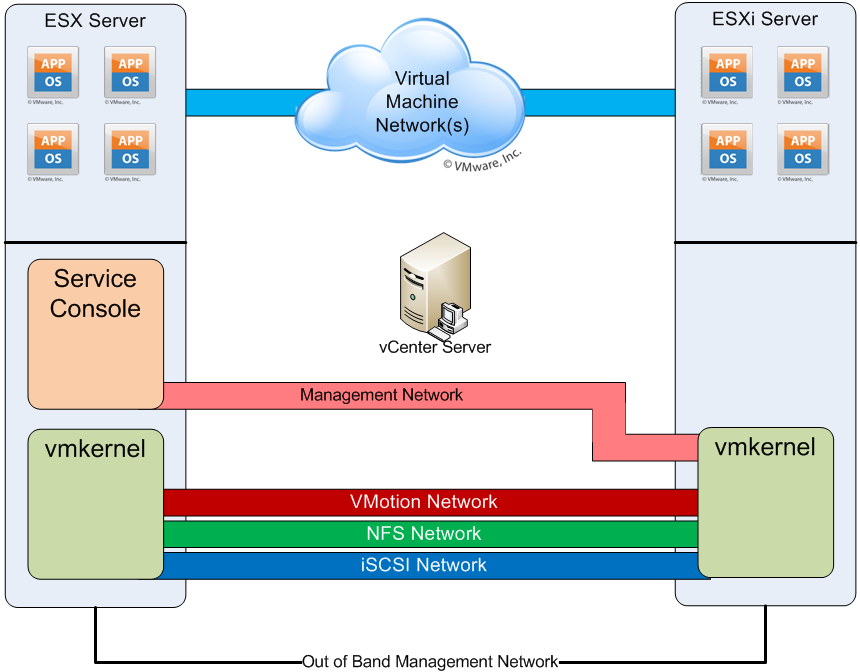 The out-of-band management network provides connectivity to your out-of-band management interface (i.e. HP iLO, Dell DRAC, IBM Director, Sun LOM, etc.). Users who have access to this network essentially have the keys to the kingdom. With proper authentication (or by hacking a username/password), they have direct console access, the ability to connect and disconnect virtual I/O devices (CD-ROM, floppy), the ability to power the host on or off, and pretty much anything else you could do if you were sitting in front of the system. This network needs to be protected at all costs! It should never be placed into a DMZ network. Another way to view the OOB network is as the door to your datacenter. You wouldn’t leave your datacenter door propped open to a back alley, so don’t leave your OOB network exposed to unnecessary risks, either!

Much like the Out-of-Band Network, the VMware Management Network is critical to the security of your virtual infrastructure. This network provides the management interface to the vmkernel – either through the service console (for ESX) or directly (with ESXi). This is the network where vCenter Server (a.k.a. Virtual Center) lives, as well as the path for ssh, web access, and third-party tools access, see Figure 2. 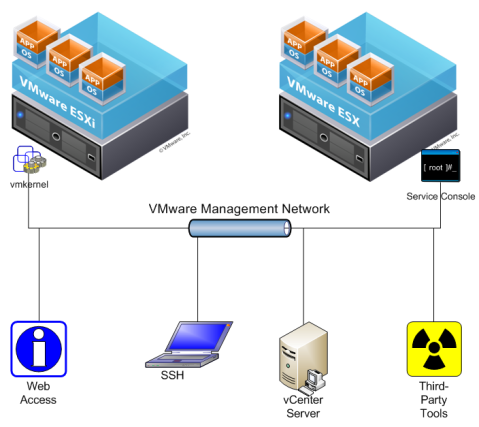 Again, in much the same manner as your OOB network, the Management Network can be viewed as a door into your datacenter. It needs to be protected very carefully and should never be exposed in a DMZ, and will frequently live behind a firewall with minimal ports exposed.

The VMotion Network is a special-purpose network with only one use – the live migration of a running virtual machine from one physical ESX/i host to another with no interruption of service to clients of the VM. The VMotion interface is a vmkernel interface that is flagged as being used for VMotion. Figure 3 shows the VMotion network.

All VMotion Network interfaces should be within the same IP broadcast domain to ensure that the hosts can find each other. No function other than VMotion needs to be able to access the VMotion network – in fact, for a two-node cluster, you can use a direct cable with no intervening switch to support VMotion.

It is important to know that the data sent across the VMotion network (on port TCP 8000) is not encrypted in any manner. This means that anyone who can connect their PC to the VMotion network will be able to listen in and intercept that data, which contains whatever happens to be in the virtual machines vRAM at the time of the VMotion. The information could include usernames, passwords, credit card numbers, you name it…it could be there.

With that knowledge, it should come as no surprise that I’m recommending that you protect the VMotion Network very carefully! 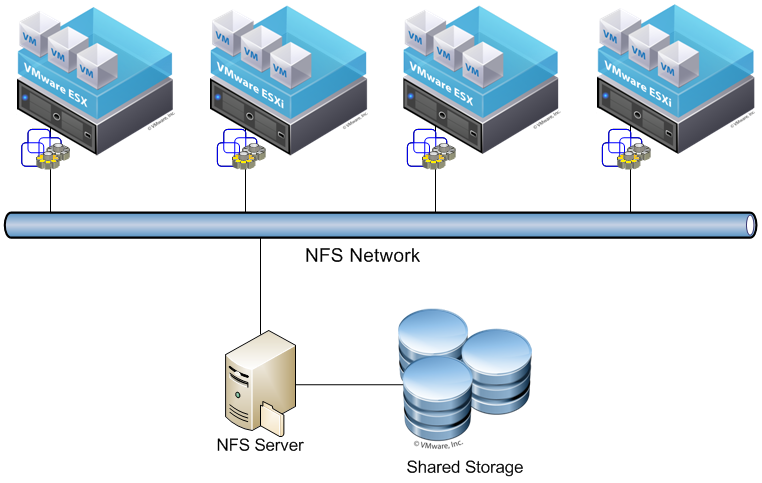 Since NFS can be used to store virtual machines and/or utility files such as .iso images, it is very common for the NFS server to have multiple connections to the network. Depending on the NFS server or appliance that you are using, there are a variety of ways that these connections can be aggregated to improve the performance of your NFS network. Regardless of how the NFS server is connected to the network, the ESX host is bound by the rules of the vSwitch that’s used to support NFS traffic, as discussed in Part 3.

From a security perspective, the NFS protocol is not encrypted or otherwise secured on the wire. This means that anyone who has access to the NFS network has the ability to intercept data that represents the on-disk information stored in virtual machine files. Obviously, this is a significant risk that needs to be mitigated with appropriate configuration and management actions.

The iSCSI Network is quite similar to the NFS network. The primary difference between NFS & iSCSI is that iSCSI is a “block oriented” protocol whereas NFS is a “file oriented” protocol. What does that mean? Basically, it means that with NFS, it is the NFS server that is responsible for managing the filesystem and individual blocks of data on the disk. The ESX Server doesn’t care if the disks are formatted with NTFS, ZFS, ext3, or Ken’s File System – it never sees the structure on the disk. It is the NFS Server’s responsibility to read from, write to, and manage access of all information on the disk.

Conversely, an iSCSI Target (that’s what a single instance of an iSCSI server process is called), the ESX server is intimately knowledgeable about the on-disk structure (unless you happen to be using a Raw Device Map (RDM)) because ESX will communicate with the iSCSI Target using standard SCSI commands, exposing the actual on-disk blocks of data to the ESX host. In many, if not most, cases, the logical unit number (LUN) exposed by the iSCSI Target will be formatted by the ESX host as a VMware Filesystem (VMFS) volume. Figure 5 shows a typical iSCSI configuration. 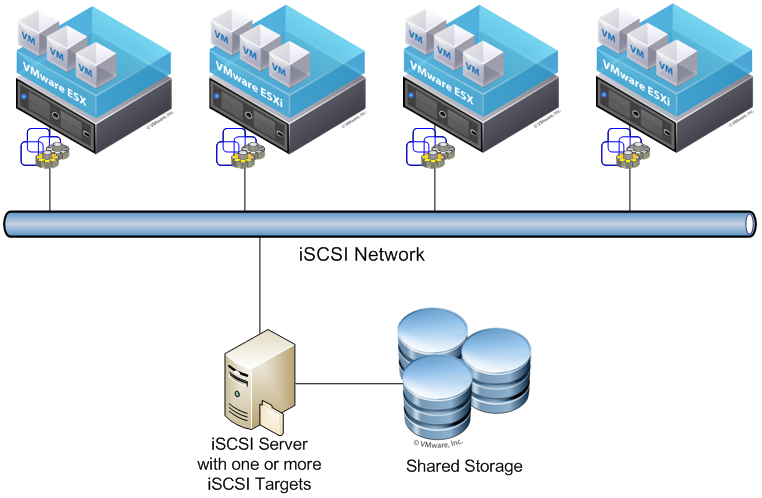 As with NFS, it is not uncommon to see an iSCSI Target configured with multiple uplink connections into the network. And just like NFS, iSCSI is bound by the rules of the vSwitch for load balancing and failover.

I hate to be redundant, but this is worth stating: From a security perspective, the iSCSI protocol is not encrypted or otherwise secured on the wire. This means that anyone who has access to the iSCSI network has the ability to intercept data that represents the on-disk information stored in virtual machine files. Obviously, this is a significant risk that needs to be mitigated with appropriate configuration and management actions.

Here’s where things get interesting! When you start talking about virtual machines, you’re talking about all the servers that live in your datacenter. These servers provide and consume services of all types – from other virtual machines, from physical servers in the datacenter, and from resources of all types on the Internet and other external networks. Obviously, this means that there may be the need to connect to more than one network to support all of these different communications paths. Figure 6 provides a view of some of the possible connectivity that needs to be supported by the VM Network(s). 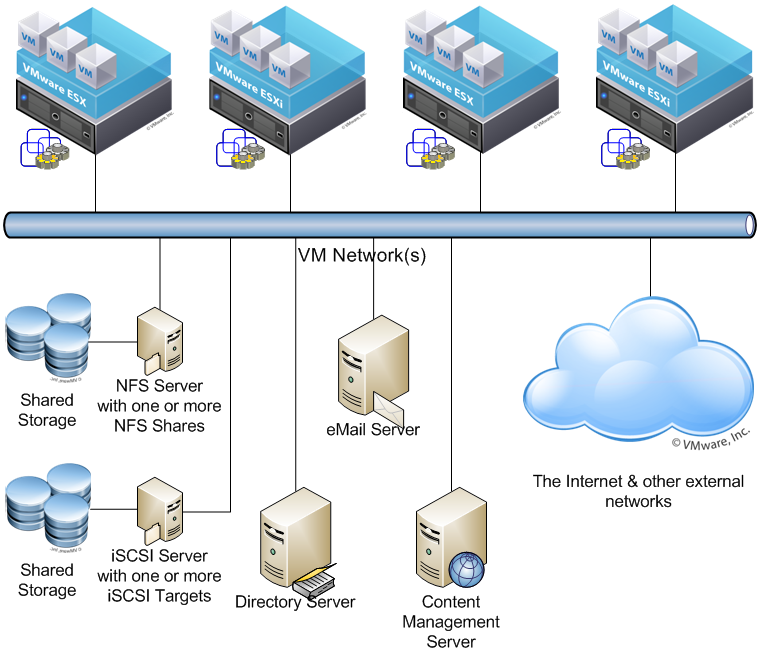 Notice that I’ve included an NFS Server and an iSCSI server in this diagram. You might ask “Why?” Well, it’s simple. The guest operating system inside a VM can directly mount an NFS volume and it can also use an iSCSI Initiator to connect to an iSCSI Target.

Some of these networks may need to be separated from each other. Depending on the level of sensitivity of each network, you may be able to use a single network divided only by IP subnets; you may need to use VLANs to provide a logical separation among the networks; and you may need to use totally separate vSwitches with dedicated pNICs to provide the required separation. I can’t help you with these decisions…that’s between you, your network team, your application team, your management team, and your security officer (good luck!).

Also notice that, for the first time in my initial six diagrams (other than the ESX Service Console), the network connections into the ESX/i hosts is not through a vmkernel port. In this case, the connection is via a vSwitch that is configured for Virtual Machine connectivity. That’s really just a technicality, a configuration setting. In reality, all vSwitches are owned and managed by the vmkernel.

There are some general guidelines that I like to use when designing a network architecture. Based on the discussion above, you can see that there are quite a few networks that need to / should be protected or isolated. I recognize that not everyone shares the same views on security and data protection – and that’s perfectly fine (as long as you understand the consequences!). I’ll try to accommodate as many positions as I can…on with the show!

There are two primary considerations when deciding how to carve up your networks: security and performance. The third consideration is manageability, and we’ll talk about it in a moment. The key to picking the optimal configuration based on the number of pNICs you have in your hosts is to understand the level of risk associated with mixing the various networks. I’ve created a couple tables that shows my personal assessment of the risk associated with each pairing. Table 1 shows the security implications while Table 2 shows the performance ramifications.

My rationale for assigning these levels of security risk are as follows:

Your assumptions about the level of risk associated with each network may be different than what I’ve suggested here. It doesn’t matter, simply substitute your values into the calculations and you’ll be set.

If you evaluate each network individually, you can develop an understanding of the traffic patterns that exist for each.

Next, I’ve taken the two considerations and combined them. The result is a matrix that shows the overall “risk” of combining the various networks (see Table 3).

Again, these are not set-in-stone, has-to-be-this-way recommendations, but rather a tool to be used to help you make your decisions.

Oh, I nearly forgot – I promised to talk some about manageability. Basically, I recommend that each of these networks be separated into individual port groups, even if you’re not using VLAN tagging. If possible, create separate vSwitches for each of the major networks (Management, VMotion, IP Storage). For the VM Network(s), I recommend at least one vSwitch (depending on separation requirements) with a separate port group for each different network. Figure 7 shows two possible configurations.